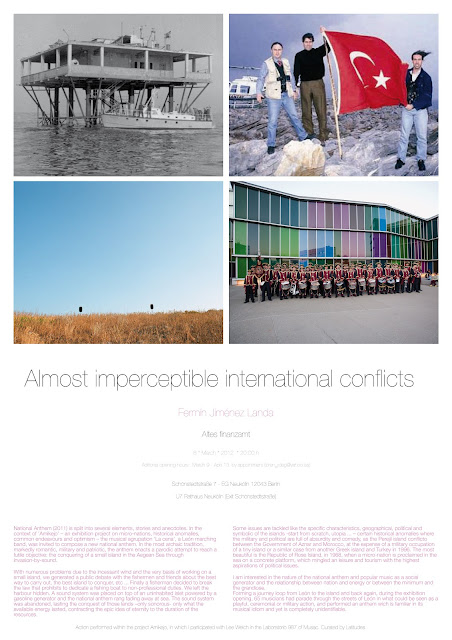 National Anthem (2011) is split into several elements, stories and anecdotes. In the context of 'Amikejo' – an exhibition project on micro-nations, historical anomalies, common endeavours and optimism – the musical agrupation ‘La cena’, a León marching band, was invited to compose a new national anthem. In the most archaic tradition, markedly romantic, military and patriotic, the anthem enacts a parodic attempt to reach a futile objective: the conquering of a small island in the Aegean Sea through invasion-by-sound.

With numerous problems due to the incessant wind and the very basis of working on a small island, we generated a public debate with the fishermen and friends about the best way to carry out, the best island to conquer, etc ... Finally a fisherman decided to break the law that prohibits to dedicate a fishing boat to non-professional duties. We left the harbour hidden. A sound system was placed on top of an uninhabited islet powered by a gasoline generator and the national anthem rang fading away at sea. The sound system was abandoned, lasting the conquest of those lands –only sonorous- only what the available energy lasted, contracting the epic idea of eternity to the duration of the resources.
Some issues are tackled like the specific characteristics, geographical, political and symbolic of the islands -start from scratch, utopia ... – certain historical anomalies where the military and political are full of absurdity and comedy, as the Perejil island conflicto between the Government of Aznar and Morocco, at the expense of a military occupation of a tiny island or a similar case from another Greek island and Turkey in 1996. The most beautiful is the Republic of Rose Island, in 1968, when a micro-nation is proclaimed in the sea on a concrete platform, which mingled an leisure and tourism with the highest aspirations of political issues. I am interested in the nature of the national anthem and popular music as a social generator and the relationship between nation and energy or between the minimum and the grandiose.

Forming a journey loop from León to the island and back again, during the exhibition opening, 65 musicians had parade through the streets of León in what could be seen as a playful, ceremonial or military action, and performed an anthem wich is familiar in its musical idiom and yet is completely unidentifiable.

Action performed within the project Amikejo, in which I participated with Lee Welch in the Laboratorio 987 of Musac. Curated by Latitudes.