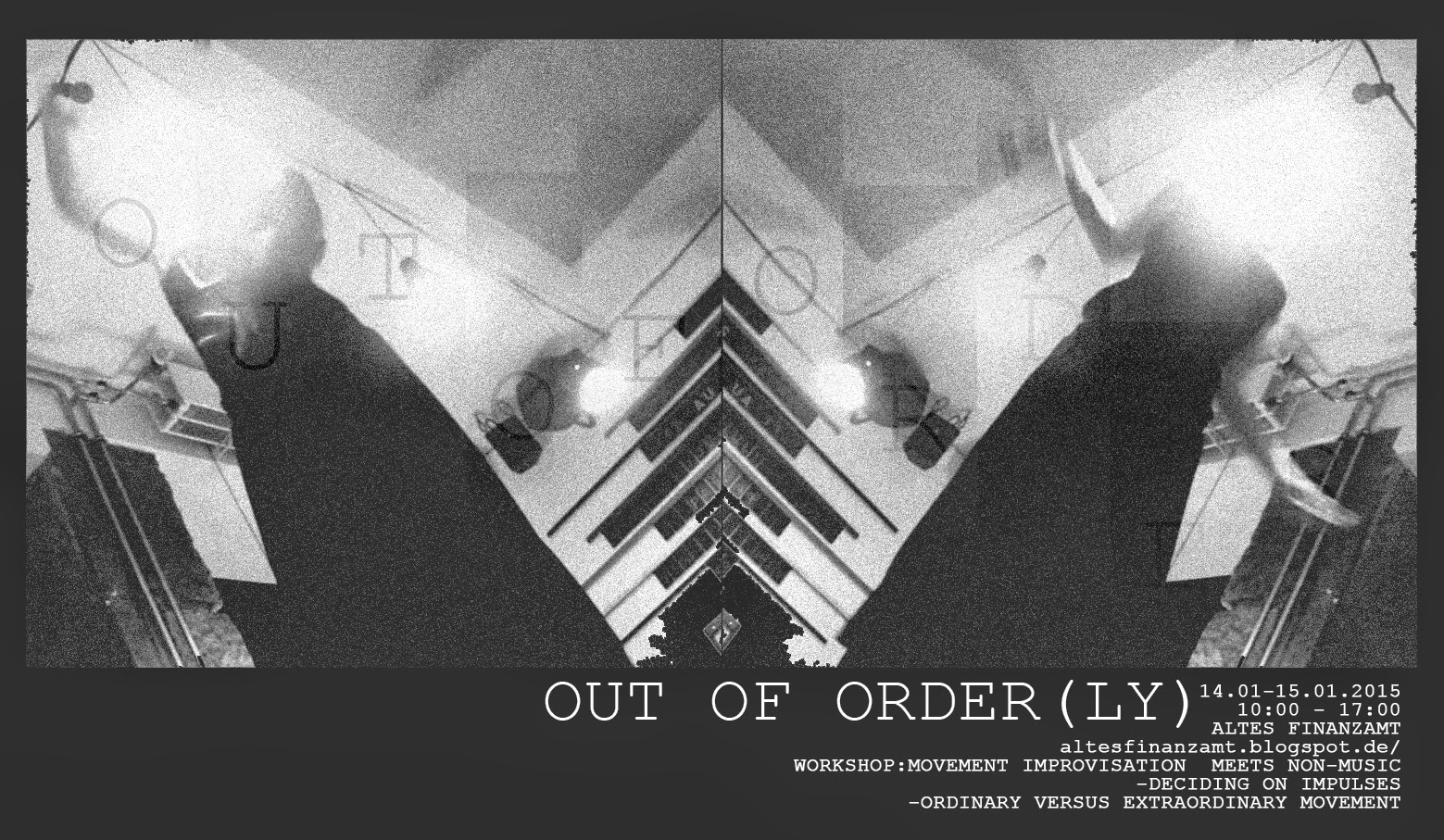 MULTIVERSAL presents OUT OF ORDER as part of Vorspiel 2015 by Transmediale and CTM, from 14th-17th of January at Neu West Berlin, Altes Finanzamt and Ex -Stasi building: workshops, concerts, performances, exhibitions, installations.

We are welcoming people from all kind of backgrounds that are interested in exchange, trial and error, playing, working and improvising individually and as a group within a constant change of musical environment.
The classes begin from sensing the body itself somatically, then uses simple improvisation proposals to bring awareness to the spacetime we are moving through. It aims to "Find The Most Open Question" that can open a space for protagonists from truly diverse backgrounds to communicate and play together.
It also aims to explore performance as something involving both action and reception.

There will be 2 workshops on two days, both for beginners and advanced level practitioners.

WORKSHOP 1 :
DECIDING ON IMPULSES (David Bloom & Rebekka Böehme)
We will offer communication methods in various spaces, between music and movement, by focusing on different states of mind, dynamics, body energies, transformation into other qualities and limitation.
We will experiment with action, reaction and interaction by working alone, in couples or as one group.
Wednesday, 14th
10 am - 1 pm
Thursday, 15th
10 am - 1 pm

WORKSHOP 2 :
ORDINARY VERSUS EXTRAORDINARY MOVEMENT (Furutani Michiyasu & Lysandre Coutu-Sauvé)
We will focus on ordinary and extraordinary movement within communication in space, between movers, movers and musicians as well as movers and objects. Also we will explore how to weave fragment of movements together into a coherent story which will affect others.


Please, bring one of your favorite objects with you.
*
For both workshops feel free to bring your instruments.
Also bring shoes and preferably knee pads.

David Bloom
was born in Heidelberg, Germany, to a family from New York, NY. Has been playing the piano professionally for 18 years, including a stint at the bar Marie's Crisis in New York. Received his dance training mainly at the Hochschule für Musik und Darstellende Kunst in Frankfurt am Main, where his teachers included Dieter Heitkamp, Marc Spradling, Nora Kimball and José Biondi. Also strongly influenced by workshops with William Forsythe, Kirstie Simson, & Benoit Lachambre. Was a member of the dance ensemble at the Staatstheater Darmstadt directed by Mei Hong Lin, and has participated in projects by Marco Santi, Michael d'Auzon, Nir de Volff/Total Brutal, Micha Purucker, Ingo Reulecke, Canan Erek, Friederike Plafki & Felix Ruckert. Since graduating from the M.A. Choreography course at the Hochschulübergreifendes Zentrum Tanz (Inter-University Center for Dance) in Berlin, he has been focusing mainly on his own work, including Die Heilige und die Hure (a solo for Felix Ruckert), and enemy, an interactive sauna dance piece. His film Quintet premiered at the Berlin Porn Film Festival 2013.
David is the recipient of a 2012 danceWEB scholarship.
http://davidbloom.info/

Rebekka Böehme
As a dancer and choreographer she works with various artists and companies in the scope of dance, (site- specific and interactive) performance, film, installing, improvisation and theatre. Rebekka also created own dance pieces and video works which have been shown in different venues and festivals in Germany and abroad.
https://bragetormanen.wordpress.com/

Michiyasu Furutani
is a performer and dancer born in Osaka, Japan and now primarily based in Berlin. Furutani's work and expression is concentrated on Butoh technique and practice. His experience and capabilities are however varied - Furutani has worked on different projects with stage directors, film­makers, dancers, actors, and musicians. In addition, as a dancer and performer, he is free to experiment with modern, contact improvisation practice, classical technique and other ways for investigating expression in a new manner.
http://sieteydos.tumblr.com/

Lysandre Coutu-Sauvé
(creator & dancer) graduated from l’École de danse contemporaine de Montréal (LADMMI) in 2007. In Montreal, she worked with choreographers such as Marc Boivin, Estelle Clareton, Mélanie Demers and Andrew de Lotbinière Harwood (AH HA Productions). Berlin based since 2009, she worked as a freelancer for cie. FAS, Nir de Volff/Total Brutal, Marjana Krajac/cie. Sodaberg, Morgan Belenguer, the CTM Crew for Transmediale 2013 among others. She also created her own work like Born as Animals (2010), Divers Suit No.1 (2011) and Bastard with a Name (2015).